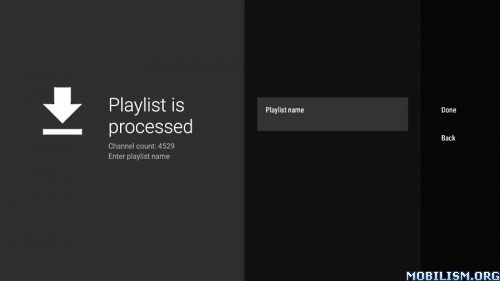 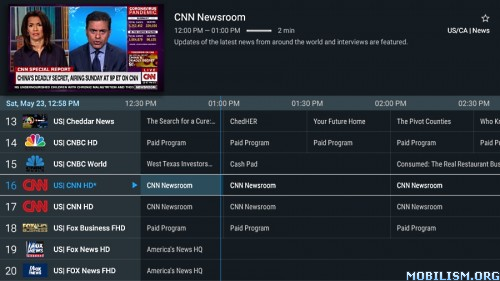 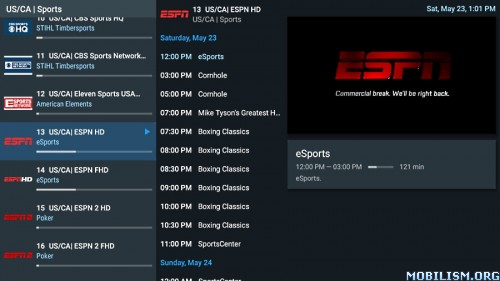 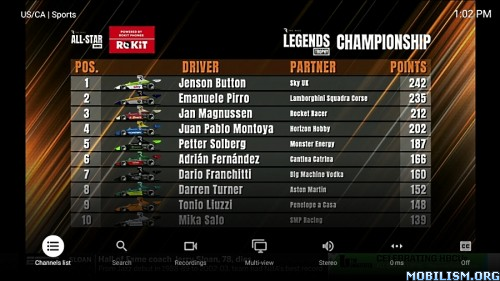 IMPORTANT! TiviMate doesn't provide any TV sources. You need to add a playlist from your IPTV provider to be able to watch live TV channels.

What's New:
Version 2.8.0 May 28, 2020
-Custom recording (custom start date/time and duration)
-Settings to hide current programs and past programs without catch-up in the viewing history
-Fixed the issue with playing recordings via SMB
-Fixes and improvements

*If you are not getting VOD, use the Full Playlist Url from provider instead of Xtream Codes login
Be sure to go to Playlist created & scroll down to manage groups & make sure select show VOD groups

View This Link As A PNG Image To View All Logo's
https://images.mobilism.org/?di=E71DO1AV

Original Mod Details By CopyMist:
-Unlocked Premium functionality
-Cut analytics and left requests
-No need to log in to your account
-Not a clone, it will stand on top of the old version

This app has no advertisements

May 30th, 2020, 10:31 am
Amazes Me The Amount Of Downloads & People Don't Have The Respect To Like A Release But Don't Hesitate To Put In Their Filelinked Store

thanks if you can find some better custom images i will see what can do i could not find many good images
May 30th, 2020, 10:37 am

walleye66 wrote:hey bro can you add this if get some free time !st time trying some diff from stick this thing is a beast! 128gb.......hope your son is doing ok thank you for all you do

spydog
Major Android Releaser
Jun 3rd, 2020, 11:23 pm
#7580161 by spydog
links updated added dropapk links with underscrore instead of parenthesis for those that had to rename
also added note if the VOD doesn't work for you:
If you are not getting VOD, use the Full Playlist Url from provider instead of Xtream Codes login
Be sure to go to Playlist created & scroll down to manage groups & make sure select show VOD groups
Jun 3rd, 2020, 11:23 pm

Sorry Mate! ignore this ...For some strange reason I could not see the 1st link..but now I can.. Just refreshing the page solved it.

mushmash wrote:Update on this app, as there has been talk on the dev's page, that he has used easter eggs in the code to block the epg after a few days, i can confirm this is the case, can this be looked into, and can we roll back to a previous version without this happening.

hmmmm.......strange my epg still works as i type i don't use xtream login ever, i looked at that area of mod vs official & seen nothing extraordinary diff to cause if the case & i believe them easter eggs would have to impact buyers too, with that said maybe CopyMist is aware he is only one who has been able to mod this as of today
Jun 13th, 2020, 8:14 pm

walleye66
Jun 13th, 2020, 9:34 pm
#7608596 by walleye66
i never use xtream login either i put the full playlist url & full epg url in always i have 3 services all loaded into tivimate & epg works on all 3, problem is not all service providers will give you the full url's been there dumped em' all cause they want you to use their apps, i have used the xtream login with dumped providers & epg didn't work even fought with them to send me url's they refused so bye bye, tivimate smokes em all, played with ott epg never works right ever & too many diff people modding it & the epg is always broken in mods lol, updates too much redflag cause they never can fix the bugs & the amoint of settings just to even get it functional are insane, theTelevizo app is ok but has no epg for all channels at same time its individual
Jun 13th, 2020, 9:34 pm
Amazes Me The Amount Of Downloads & People Don't Have The Respect To Like A Release But Don't Hesitate To Put In Their Filelinked Store
tinybilbo
VIP
Jun 14th, 2020, 11:56 am
#7610102 by tinybilbo
I had the previous version of this app installed (2.7.5) and also lost EPG after a couple of weeks, Wasn't sure if it was the app or or my IPTV provider.
Downloaded this version and installed it over the old one to no avail.. Rolled back to the v2.70 version and all working again.

I've tried multiple cracked versions of this app, and they all have some issues:

- some get their premium features disabled on Amazon's FireStick devices, displaying a "you are using a cracked version" after ~24 hours. Weirdly, the same version doesn't do that on nVidia Shield, keeps working

- some do not grab the VODs from XC Login, but obviously they would work with M3U8, but that defeats the purspoe -- I've also experienced a weirdness with a version that initially it grabbed the VODs, but it wouldn't refresh them after a few days; deleting the source and re-adding it worked once, then to refresh again you had to do it again...

- so far, all 2.7+ and above versions have the same issue with EPG -- even when using/adding another EPG source (not from XtreamCodes, for example), it will randomly delete all EPG after about a week of working fine; I can see that the app is actually fetching the EPG info from the server, and it's receiving the data, it just choses to give you the middle finger